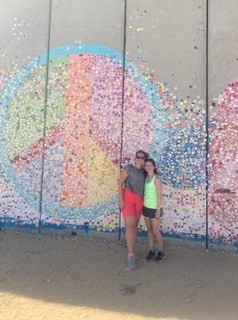 The past week has been one full of learning through the best method possible: discussions.

I spent the weekend along with 50 other Onward participants on a Social Justice themed Shabbaton. We met community members and activists in Southern Tel Aviv and Lod. We heard from Ethiopians, Eritreans, Israeli Jews, and Palestinians. Hearing their stories was eye opening. Without this Shabbaton, I never would have had the opportunity to meet and learn from these people. These are of a couple things I found the most shocking/compelling:

I learned so much more at the Shabbaton, but I am gonna leave it at these two remarks for now and move on to our trip to Sderot.

Our New York/Cincinnati track had our third and final day trip this week. Throughout all three–Haifa, Jerusalem, and Sderot– we've learned a lot about the different sides of Israel. In Haifa we learned about various minority religions that make up Israel, such as the Druze and Christians; in Jerusalem we learned about Jewish History; and today near the Gaza strip, we learned about the present state and tensions of Israel.

We started the day off with a bike ride. As you may remember, this was the Cincinnatians' second bike tour because we also went in Netanya. However, this was a much different experience. We were off roading in the middle of the desert. We even ran into a herd of sheep! We all finished the ride sweaty yet energized. 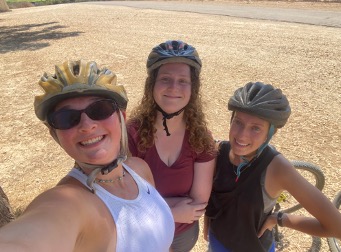 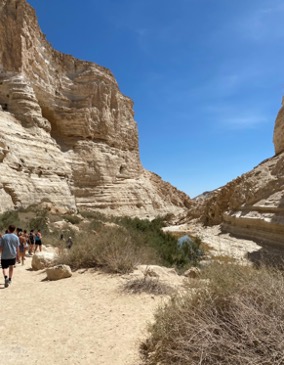 Photos: Avital and friends from the NY track on a bike trip

Next we visited the Path to Peace organization. It was powerful to hear from a woman who lives in Sderot about what it's like living adjacent to the Gaza strip. There were so many aspects of life there and in Israel in general that left me awestruck but are normal for Israelis. For example, the fact that every house has to have a bomb shelter.

We finished our trip by adding mosaic pieces to the mural on the wall between Sderot and Gaza. We each picked a piece that spoke to us and wrote a wish on the back. The mural is beautiful! The whole experience felt strange and surreal– being so close to Gaza and being able to see inside. It made the conflict all feel more tangible.

My favorite part of the trip was our conversation with our madrich Ron on the drive home (a little over an hour). He is so articulate and conscious of both sides of every topic we discussed: the occupation in Gaza, tensions in Hod Hasharon, and integration in Israel in general. Listening to him and discussing more since has made me more aware of various perspectives. It also complemented my Shabbaton perfectly. I built on what I'd learned there with the additional perspectives shared throughout the day. 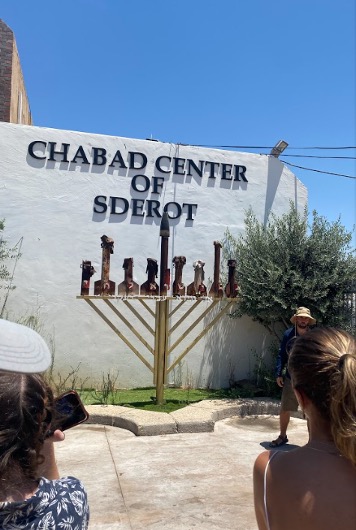 Overall, I'm still processing the past few days and am excited to continue having these types of discussions throughout my final weeks here.