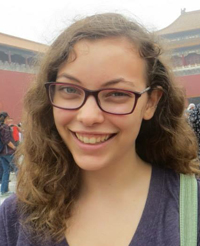 Hannah Berger  (Center for Holocaust and Humanity Education) is the daughter of Linda and Andrew Berger. She attends Kalamazoo College, where she is pursuing a double major in Religion and History and a minor in Anthropology/Sociology.  She is an interfaith student leader, member of the Jewish Student Organization, and works on the college’s theater productions as an actress and member of the crew. In her free time, she enjoys cooking with her friends, spending time with her parents, and traveling. She has been to eight countries and hopes to study abroad in either Italy or India her junior year. Hannah is thrilled to be interning at the Center for Holocaust and Humanity Education this summer. She was inspired to apply for this position because of a life changing experience she had in the summer of 2014. Through her father’s connections, she was lucky enough to travel with a group of American Jewish women rabbis and leaders to Berlin and Prague. Their purpose was to honor the memory of Rabbi Regina Jonas, the first woman rabbi ever ordained, who was tragically murdered in Theresienstadt concentration camp. This trip reignited her long dormant passion for Judaism and strengthened an already keen interest in history. 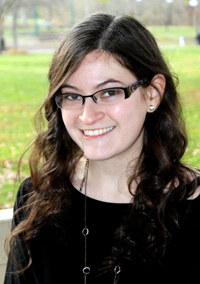 Sara Boyle (Cedar Village) currently attends Northwestern University as a sophomore. She is a pre-medical student majoring in cognitive science with a minor in computer science. As a high school student in Cincinnati, she was influenced greatly by the Madrichim program at Wise Temple. Now she is involved in the Evanston community through her job as an aide at Roycemore School and her volunteer service with AMASE, an organization that plans music and art lessons for children with disabilities. She also participates in various orchestras on campus. Sara is thrilled to have the opportunity to intern and to learn at Cedar Village. 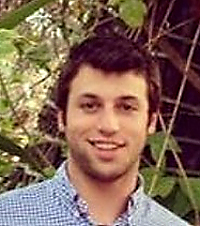 Ben Fershtman (Jewish Foundation of Cincinnati), a graduate of Wyoming High School, recently completed his freshman year at The Ohio State University where he is pursuing a degree in Biomedical Engineering with an Entrepreneurship minor. At OSU, Ben is involved with Hillel, is the President of the Bitcoin Group, and is leading the re-chartering of Tau Epsilon Phi, a Jewish fraternity.  In high school, Ben was the Social-Action Vice-President of his youth group, a Madrich for Wise Temple, a volunteer tutor for Wyoming, and the founder of the WHS Coffee Shop, a charitable business. Ben is thrilled to be interning at The Jewish Foundation of Cincinnati. 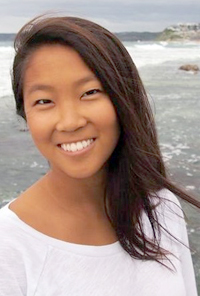 Paulina Fisher (Jewish Community Center) graduated from Madeira High School in 2012. She is currently in her junior year at Miami University. She is pursuing a degree in Marketing through the Farmer School of Business. Throughout school she has participated in the club Sailing Team and Invisible Children Club, been part of the sorority Alpha Omicron Pi, and worked at the recreation center while also being a tour guide for the university. Paulina also spent a semester abroad in Newcastle, Australia last fall. She traveled to Israel for Birthright after her freshman year of college through Hillel at Miami. Paulina is looking forward to learning and interning at the Mayerson Jewish Community Center. 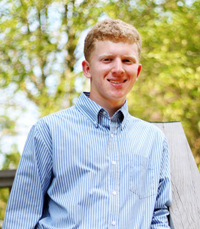 Benny Friedman (Jewish Federation of Cincinnati-Create Your Jewish Legacy) completed his freshman year at The Ohio State University where he is an honors student majoring in political science and business. He was a member of the Undergraduate Student Government and its Sustainability committee.  He participated in a weekly Hillel lunch which engaged participants in lively discussions on current events. He also played intramurals and pursued fitness goals. Benny is a 2014 graduate of Wyoming High School where he ran cross country, played Ultimate, and participated in a variety of musical programs. He traveled to Poland and Israel on a Jewish Foundation grant, was a Madrich four years at Wise Temple, and a counselor two summers at Camp at the J. He is looking forward to his Workum Internship at Jewish Federation Create Your Jewish Legacy. 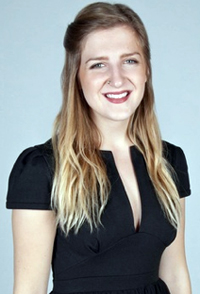 Emily Gilgoff (Hebrew Union College) currently attends Ohio University and just completed her Junior year. Her major is Communication Studies in Public Advocacy and is getting a certificate in both Women, Gender, and Sexuality Studies and Diversity Studies. Since her freshman year, Emily has been a member of the Feminist Equality Movement which is an organization devoted to creating an equal and inclusive environment on campus. She is also a member of the sorority Sigma Kappa and currently holds two chair positions. In addition Emily is heavily involved in an acapella group called The Tempo Tantrums and enjoys performing with them for various events throughout the school year. This past summer Emily went on the Onward Israel trip and interned for an Israeli theater company. She was greatly moved by her experience there and hopes to return in the future. Emily is looking forward to interning for the Hebrew Union College. 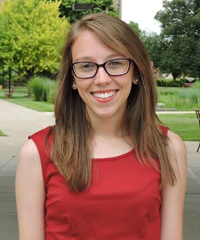 Sandra Glazer (American Jewish Archives) just completed her sophomore year at Miami University, where she is taking classes at both the Oxford and Hamilton campuses. She is majoring in Psychology and plans on going to graduate school after completing her B.S. degree. Sandra is very involved in student life at school and is currently the marketing director of the Miami Hamilton Student Government Association. She also works on campus as a writing and psychology tutor and as a student aide in the IT department, and is also a member of the student advisory board with the Miami University Police Department. She is very excited to spend the summer interning at the American Jewish Archives. 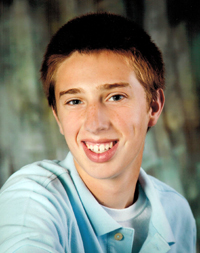 Brian Goodman (Jewish Federation of Cincinnati- Planning and Allocations) attends the Kelley School of Business at Indiana University where he just completed his sophomore year. He will graduate in 2017 with majors in Finance and Accounting. He is a business fraternity called Delta Sigma Pi, and hopes to be the Vice President of Finance next year. Brian attended Camp Barney Medintz for 4 years as a camper and went back last summer as a counselor. Camp Barney Medintz, traveling to Israel twice, and a strong overall Jewish identity sparked Brian’s interest to make a difference in the Jewish community this summer with this internship. He is looking forward to intern for the Jewish Federation of Cincinnati this summer. 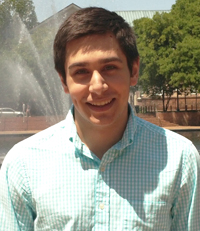 Ryan Hodge (Camp Livingston) is a sophomore at the University of South Carolina. Ryan, a Computer Science major, is very involved with Hillel at USC, where he serves as Treasurer. Additionally, Ryan is a University Housing representative for incoming and prospective students. Ryan attended Deer Park High School and grew up at Wise Temple, working as a Madrich for four years. During high school, he embarked on a life-changing trip to Israel, and participated in the Avodah program at Goldman Union Camp Institute, where his love for Jewish summer camp began. Ryan is beyond excited to be managing communications for Camp Livingston this summer! 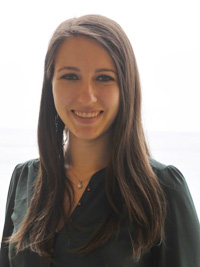 Jackie Rudich (JCRC) is a first year student in the Dual BA Program between Sciences Po and Columbia University, and she is currently attending school in the beautiful Cote d'Azur region of southern France.  She is involved in Model UN and was named editor in chief of her school's newspaper for the upcoming year.  Jackie graduated from Sycamore High School in 2014, where she enjoyed participating in the choir, theatre, and photography programs.  She was extremely active as a madricha and youth group member at Wise Temple before she left for college. Jackie is thrilled to be interning at the Jewish Community Relations Council this summer. 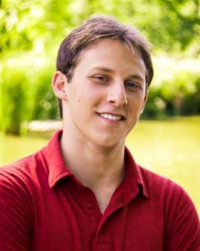 Gabe Schenker (Rockdale Temple) has just completed his freshman year at Denison University as an economics major. He is a proud 2014 graduate of Sycamore High School and a lifetime Cincinnatian. At school, Gabe participates in community service and service learning with the Denison Community Association. He also acts and sings in several performance groups, attends Hillel events, and he plays soccer recreationally as often as possible. Gabe loves to travel—his passport shows visits to France, Belgium, England, Italy, two stamps each from Israel and Spain, and he plans to study abroad. Next year, he will be a Leadership Fellow at Denison, helping to develop a culture of leading with purpose and integrity across campus. Gabe is very excited to be a Workum intern at Rockdale Temple—where he went to preschool way back when—this summer! 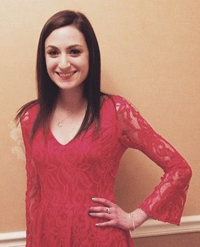 Ilana Siegel (Cincinnati Hillel) currently attends the University of Cincinnati where she has just completed her sophomore year.  She is a Communications major with a Marketing minor and Public Relations certificate.  At UC, she is actively involved in her sorority Chi Omega and serves as the Public Relations Chair.  Another big involvement of hers is her organization CommuniCATS where she serves as VP of Public Relations.  Additionally, she is involved in Hillel and a few other academic organizations.  In May, she will return to Israel for the second time by attending Birthright and she is very excited for the many experiences and connections she will make along the way. Ilana is thrilled to begin her first internship experience this summer through the Workum Fund at Cincinnati Hillel! 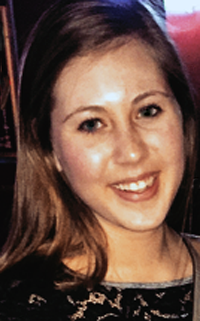 Samantha Weiss (Jewish Family Services) currently attends Miami University where she just completed her first year. She is majoring in Speech Pathology and Audiology. Currently she is involved in her sorority Kappa Delta. Additionally she is part of a club called Best Buddies. She graduated high school from Sycamore Community Schools. She danced on her high school dance team, the Flyerettes, for four years. Additionally throughout high school she was a madricha for Isaac M. Wise Temple. For the past two summers she has been a counselor at the Mayerson J.C.C. day camp, Camp at the J. Samantha is excited to be working with Jewish Family Services this summer as a Workum intern.