This week, our Workum Wednesday program was held at the American Jewish Archives, which is “the largest free-standing repository dedicated solely to the study of the American Jewish experience”. The Archives have almost anything you could think of including: a letter from Ronald Regan congratulating a congregation on their 100th anniversary, a newspaper clipping of an article in which a man correctly predicts the sinking of the RMS Lusitania, and even a letter that is essentially someone bashing their neighbor who just got married. I could have stayed there for ages going through everything they have.

Asher Caruso, who is interning at the American Jewish Archives this summer, gets to exactly that every day (I’m not saying I’m jealous, but I am incredibly jealous). Asher is a junior at the University of Cinci 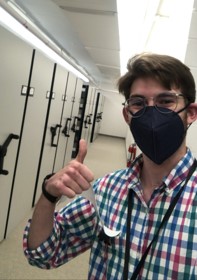 nnati, studying Philosophy and Anthropology. Clearly, the Archives is a great fit for him.

In his time at the Archives, Asher has been up to quite a lot. He has helped compile documents for rabbinical students who are studying there, as well as help put together and maintain an exhibit on the first female rabbi ordained at the Hebrew Union College of Cincinnati, Sally Priesand. He also informed me of the vast amounts of sifting through the archives he has done.

When I asked him about his experience at the Archives, Asher told me, “It is so meaningful and heartening to be in a place where being in academia is normalized. You don’t see people around ‘doing’ philosophy or really engaging in academic discourse in everyday life. I know the novelty of working here hasn’t worn off yet, but I genuinely love it.” I could tell even from the short time that I was at the Archives that Asher fit right in. His passion for the Archives and the history it holds is truly contagious.

After the American Jewish Archives, I headed to the Nancy and David Holocaust & Humanity Center with Eli Weiler, who is also interning at the Jewish Federation of Cincinnati, specifically with Create Your Jewish Legacy. Eli is a sophomore at Miami University, and he is thinking of studying Marketing and Communications or IT. We've actually been working on quite a few different projects together (along with another Federation intern, so hopefully I don't end up repeating myself too much. 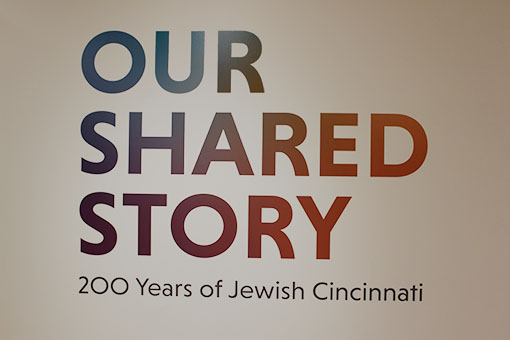 At the Holocaust & Humanity Center, Eli and I were tasked to go through the Our Shared Story exhibit, which catalogues the past 200 years of the Jewish community in Cincinnati. We needed to take a picture of everything they had in order to add it to the timeline on the Create Your Jewish Legacy website. It was so cool to see all of the commonplace things that were started by Jews in Cincinnati (my new favorite fact is that Frank’s Red Hot Sauce was started by a Jewish Cincinnatian).

During our time at the museum, I got to talk to Eli about what he’s been doing in his little corner of the Federation (besides all of our shared projects, of course). He told me that he was gearing up to start shadowing the IT department on some of their escapades to help fix all of our computer problems (I'm embarrassed to say I've been to IT way too many times for only four weeks).

Eli said that his experiences at the Federation are incredibly valuable, as they are helping him decide what he truly wants to do both in school and in life. He told me that being able to expand his internship to include joining the IT team was “so cool, because now [he] can explore a couple different things at once.” I definitely agree with him there. Even in our little corner of the office, the marketing department is involved in so many different parts of the Federation, it’s pretty hard not to get a little taste of everything.

I can’t wait to hear what everyone else had been up to! Until next time!