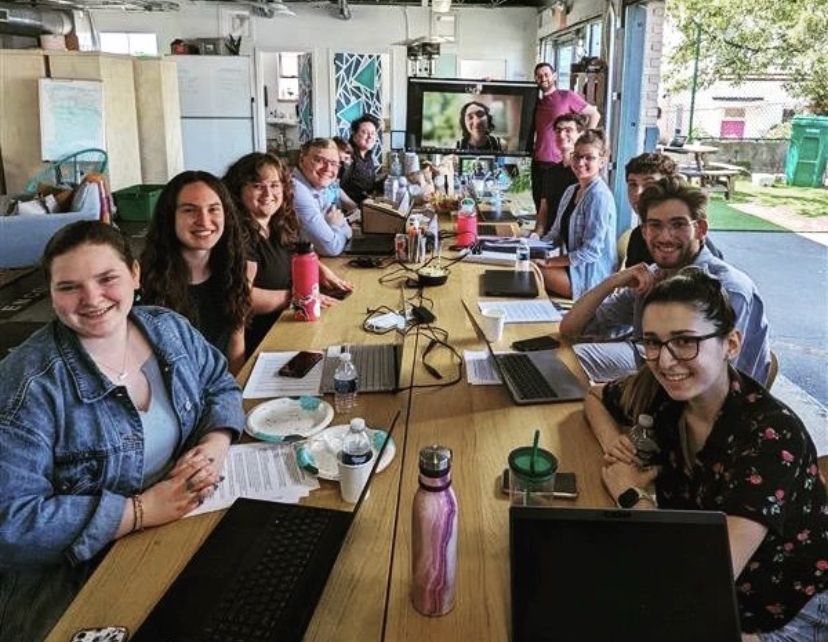 If you’re looking for an awesome place to hang out that hosts really cool programs for teens and young adults, the ish Garage is the place to go! The Garage is located in the North Side of Cincinnati (right by a row of super cute houses, which isn’t super relevant, but it definitely made my day), which I have been told is “the cool part” of the city. They host a whole range of activities and events, most notably the ish Festival every two years (This is, unfortunately, the year in between festivals). Their next big event is a part live-action-roleplay, part recycled fashion show, part Jewish learning opportunity called “Trashion”. From what I heard about Trashion, the teens involved are so lucky to be able to take part in it, and I wish I was 15-19 so that I could be involved in it too.

Louis Rosenberg is a student at St. John’s College in Maryland, and he is interning at the ish Garage this summer. His big project at ish actually is the planning of Trashion in collaboration with T3, a group of local teens who work with ish to build and support new programming, as well as many other neighborhood organizations to market the event to the community. Another part of the preparations for Trashion that Louis has been working on are the two backdrops that will be used during the event. The backdrops will be made with a ton of recycled and scavenged materials. Louis told me that his favorite part about working on Trashion has been the team meetings, where he has been able to watch as everyone’s ideas come together to make a final product.

Maya Goldenberg is a student at the Ohio State University, and is interning at the Jewish Fertility Foundation. She has also been working on an amazing upcoming event called Rosh Chodesh Rejuvenation. I recently read the proposal for this event, and it sounds amazing; a full day of yoga, self- care, and education about infertility and Judaism. Maya has been working very hard behind the scenes on this event, doing everything from committee meetings to making flyers to helping write the proposal for the event that I read. But besides that, Maya had worked on a ton of other projects with JFF, including writing introductions and interview questions for their podcast, “Fruitful and Multiplying”. Maya told me that her favorite thing this summer hasn’t been the projects she has been working on, rather the connections that she made while working on them. She said, “Really everyone at JFF is great”, but what has impacted her the most is the connections she has made with those who have shared their infertility stories with her.

Melanie Kraus has also been making a ton of connections in the community. She is a student at the University of Cincinnati and is interning at Cincy Journeys (which is right down the hall from me in the marketing department). Melanie has had a lot of projects in the month and a half we’ve been working, some of which include: getting information on the camps that Cincy Journeys gives grants to, researching different carnival games and vendors for an event, as well as creating graphics and invites for many different events. She told me that her favorite thing so far has been the more graphic design focused projects. Something really cool that Melanie has been doing throughout the summer is scheduling loads of meetings with all of the departments in the Federation (most of which Kate, Eli, and I have been to as well). It is so cool to be able to see exactly what everyone does and how all of the moving parts of the Federation work together, so I would have to agree that those meetings have been one of the highlights of my summer, especially as we work our way up the chain of command.

I can’t believe there’s only a week and a half left of the summer! They told us at the beginning that it would fly by, but I didn’t realize just how quickly it would go.